After our monkey encounter, Nick and I decided to head back to a night market for the first time since our first week in Taiwan.

Night Markets are quite amazing her in Taiwan, and I promise that I will get to writing a post with a great description of them.... but right now I'm just not up to it, so I'll just skip to one of my favorite things about Night Markets - the food.

Night markets are one of the best places in Taiwan to try out local food. They are filled with an endless array of choices, so much so that even after two months here I still find the selection over whelming.

We were starving when we arrived at Feng Chia and almost immediately happened upon our first purchase at this stand: Cheese potatoes! 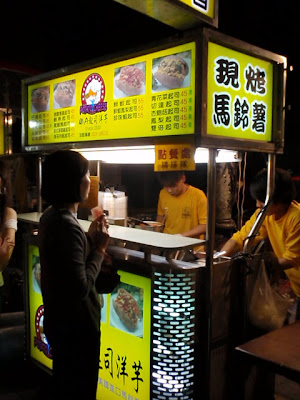 MMMMMMMMMMMMMMMMM. Potatoes are one of my favorite foods and I love them any way they are cooked. Back in the states on average I would make myself a baked potato once a week and often they were loaded with melted cheese, so this was right up my alley. As anything, though, it was done with a Taiwan twist.

I'm not really sure what all was on this thing but, damn, it was good! Ingredients included a liquid-cheese substance, ham, bacon, and corn. It was DE-LISH! 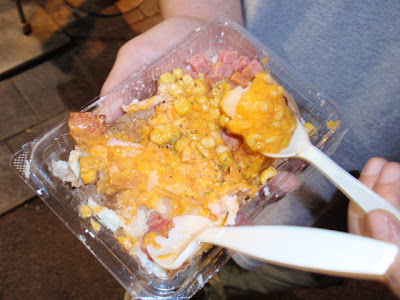 After the potato, we found some pearl milk tea and "window shopped" until we stumbled upon this little gem: 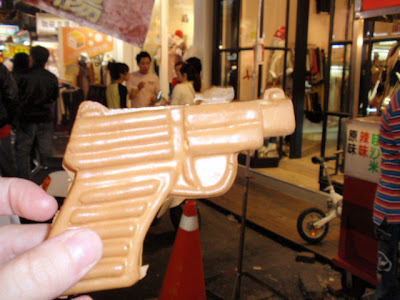 It was basically a waffle in the shape of a hand gun! We got four of these little guys for $30NT (about $1 USD) in the shapes of a rooster, a motorcycle, a gun, and another random shape that escapes me now. Again, delicious!

About an hour of meandering through the market brought us to the last, and most exciting, epicurian adventure of the night: the bloody rice cake! These are actually sold at multiple stands throughout the market, but none of them have as great a sign as this one (notice the blood dripping from the red character in the center... priceless!). 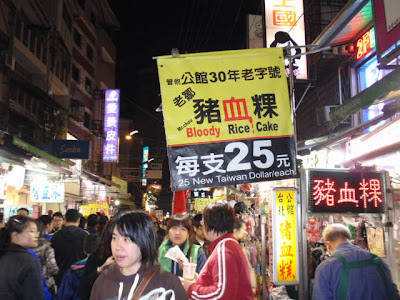 I have to say, I really enjoyed my bloody rice cake. It was about 1/4 inch thick slab of sticky rice (held together by congealed blood) dipped in peanut powder and sprinkled with cilantro. (Nick says the peanut powder is the same stuff that is put on powdered peanut donuts back in the States, although, I have never heard of a powdered peanut donut, so we'll have to take his word for it.) The actual blood-rice cake doesn't have much of a flavor, but has a nice chewy texture. The over-all flavor was mild and peanuty with a refreshing mix of fresh cilantro. 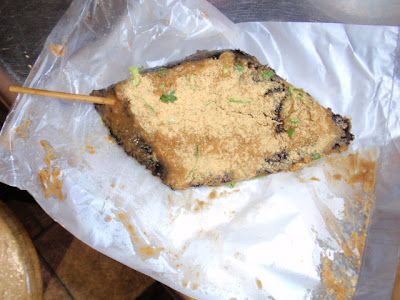 Raz
"Every man has his own destiny; the only imperative is to follow it, to accept it, no matter where it leads him." ~ Henry Miller Hi, I'm Razzelberry! World traveler and Denver Yogi. My most recent adventure was completing a 200 hour yoga teacher training program.